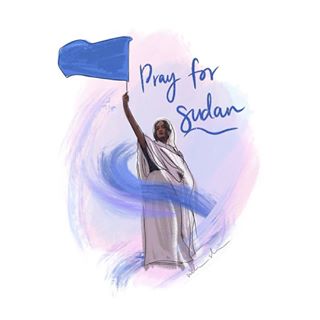 Right now, a horrible crisis is occurring in Sudan and it is not receiving nearly enough coverage. The world as a whole is, in fact, doing very little to help.

In a hopeful attempt to incite action, social media users have been changing their profile pictures to blue to help raise awareness and also declare that they stand in solidarity with Sudan.

In a military coup back in April, the then-president of Sudan, Omar al-Bashir, was driven out of his position. A transitional military council took his place. However, things turned violent when peaceful Pro-democracy protesters were attacked by a government paramilitary group, trying to maintain power.

There have been over five hundred deaths already, myriad injuries, countless horrifying rape cases, approximately a thousand people missing, and hundreds arrested. The bodies are being dumped into the Nile River to cover up the abhorrent crime.

It is a tragedy and a crisis that this massacre is happening in Sudan, and the world cannot turn a blind eye. There cannot be a repeat of the Rwandan Genocide, where countless were killed and the world did nothing. Now, we must not sit idly while these peaceful protesters are murdered and raped.

To truly help the Sudanese people, you can call (United States) Congress at 202-224-3121, enter your zip code to be connected with your congressional leader’s office, and tell them you want to support Sudan. Or, you could text RESIST to 50409 to compose a quick message to a government official, urging them to promote and take large-scale action. Another way to help is to sign the petition on change.org, which is asking for the United Nations to investigate the June 3rd massacre as a human rights violation by the military. Finally, donating to UNICEF, Save the Children, or the International Rescue Committee can have a significant impact.

It is important to note that many users on Instagram and other social media platforms have been trying to immorally capitalize on this tragedy by setting up fake accounts. These accounts appear to have the intention of helping Sudan, uploading things like “For every story repost this gets, we will send one meal to Sudan.” A lot of these are shams, with people exploiting the crisis for likes and follows. When trying to genuinely help Sudan and raise awareness, be wary of these phony charity accounts. Support organizations that might actually have an influence on the current Sudan situation, like UNICEF, Save the Children, or the International Rescue Committee.

The Next Prime Minister Will Be A Man Chosen By…Men

Project Consent Continues To Support Us All