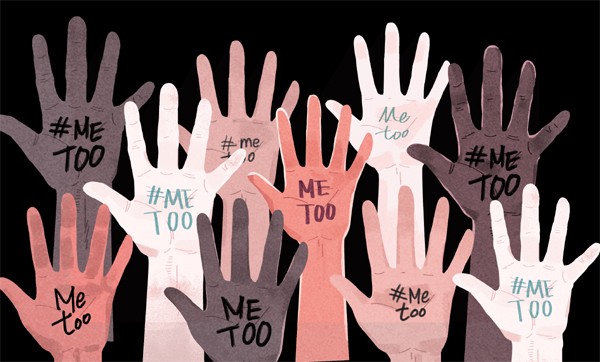 My story isn’t an uncommon one, unfortunately. I was seven or eight, there was an older, trusted family member, it happened for a year or two. After the truth broke out, another victim and I weren’t believed. We were silenced and shamed. Although it stopped after that, the effects of it were permanently ingrained into my head.

For the longest time, I didn’t bring it up. No one did. It was as if it didn’t happen, I saw that person regularly as if it was all normal. But when the lights turned off, and I was seemingly safe, tucked under covers, my mind would play the past like a highlight reel. I would toss and turn, wondering if what had happened was real, wondering why my mind wouldn’t let go of it. A guilt would wash over me each time. I’d try to force my mind to turn off but it never did.

I remember I watched Perks of Being a Wallflower when I was thirteen and broke out sobbing. It was the first time I’d seen actions like that on television, especially framed as wrong. Watching that movie made me feel dirty all over. I used to write an entertainment blog then, I quickly wrote a review and tried to get the entire experience out of my head.

After that, I began to have more late nights. The people around me were SO quiet about the whole ordeal that I would question if it was even real. I’d cry myself to sleep, remaining unsure and alone.

I can still remember the first time I told someone. I was fifteen. It was an older family member who I looked up to very much. She had told me some of her experience, and for some reason, I decided to just go for it. I remember telling her with a sense of guilt in me. As if I had done something wrong. I can’t remember what she said exactly, but that was when for the first time, I was told that I didn’t do anything wrong. It made me cry.

Something interesting about me when I was younger is that I never cried. If I did, it would be a single manly tear. My friends joked I had no emotion but I later figured out it was apathy, stemming from years of suppressing my truth. I was told I wasn’t allowed to feel it, so I did my best to not. I tried to stray away from feeling anything in general. A concept worlds away from the empath I grew up to be.

And yet, when I told my two best friends this secret of mine, I cried. He had just moved closer to me, and I knew this meant I was going to see him more often. I didn’t want to have to deal with these emotions, especially now that I could confirm it happened and that it was wrong. I still felt guilty for something clearly not my fault.

That’s when I told my mom. My mom is one of the best people I’ve ever met but at her core, she’s a peacemaker. She didn’t want to cause any trouble in the family and beyond anything, she wanted to protect my reputation. I’d lose count if I tried to keep track of how many brown girls I know that are suppressing trauma cause of “log kya kahenge?” (“what will people say?”) If the world knew this little truth about my past, it’d supposedly reflect badly on me. Even though I was a child. Even though I was the victim.

This is when I was silenced for good. Fifteen and hushed again.

It wasn’t until college that I began speaking about this again. That’s when I met this magical brown girl, who sat next to me one day and just unloaded her own sexual assault story. I told her mine and together we did a little group discussion on the topic in one of the organizations we were both a part of.

That was very difficult but it was something I didn’t even know I needed.

This summer, I told the guy I’m now dating as well as my best friends. Come Fall, I even told my sorority sisters in the midst of the storm of recruitment. Although it was never effortless, it slowly got easier and easier. This summer, I had a lot of flashbacks. Something I’d experienced after dates and parties in the past. Every flashback experience made me hurt, and feel disgusted all over.

As a writer, I usually put what hurts most into writing. I could never write this experience down. It was strange cause my mouth couldn’t form words to describe it. The memories always came as pictures, like film on a reel. I couldn’t make out the words to describe the actual experience.

I finally wrote it down this fall. One of the hardest things I’ve ever written. I took breaks every ten minutes or so, and in all honesty, it hurt so much. But that day for the first time, I typed out the word ‘molested’, a word I’d never written, let alone said out loud.

And slowly without me realizing it, for the first time in my life, the flashbacks stopped. I wrote more about the experience in my poetry collection but writing these truths had me terrified. I wondered what would happen if he read it, if my family read it, log kya kahenge?

Obviously, the trauma I’d endured as a child was awful but the worst effects of the ordeal were psychological. I was consumed with guilt. He had convinced me that it was all my fault and I spent the majority of my life believing it. I couldn’t let myself feel anything cause if I did, then I’d have to feel this too. I even turned my head away just hearing the word ‘molested’.

Now, I had my poetry collection ready for release, when the fears crawled into my mind again. Three days leading up to the release of the book, I canceled the release. I was too scared, too guilty, even though he was only in three of the nearly hundred poems in the collection. Then, by some miracle, my favorite quote popped onto my Pinterest feed about a week later.

“Write hard and clear about what hurts.”

And so, I very spontaneously decided to just submit it before I got scared again. In all honesty, I removed one of the poems about him, some of that fear still alive but the next day, my book was on Amazon for the world to read. And as I was talking to my cousin that very same day, I used the word “molested” out loud.

Pushing myself taught me to heal. Pushing myself connected me with numerous women that had similar experiences to myself. Pushing myself gave me the strength I needed to move forward from this instead of suppressing it. That is why I talk about my sexual abuse story. And that is the reason for amazing movements like #MeToo.

If you’d like, you can check out my book here.

Hiba Azeem
Hiba is a Pakistani-American college student from South Florida. She is studying Public Health and avoids homework by writing about love, mental health, and identity. She likes the smell of cinnamon, the sound of rain and happy endings. She is currently working on her second poetry collection and a romance novel. Her first collection 'I Love You' is available on Amazon. You can check her out on Twitter and Instagram, @hibzeem, for updates.