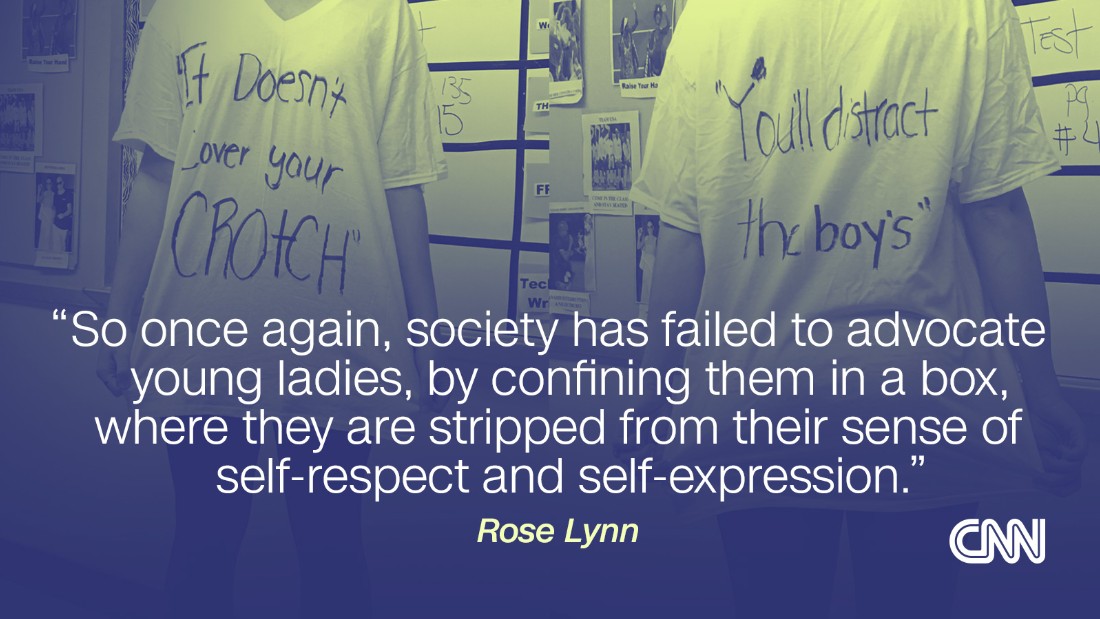 Picture this: it’s eighty-four degrees outside, and a twelve-year-old girl is getting ready for school. She throws a tank-top on under her sweater, in case she gets too hot during the day, and goes to school. During class, she starts to get hot and takes off her sweater, exposing her shoulders and her bra strap. Boys in her class make a few catcalls towards her because of her exposed bra strap. But this is just “boys being boys,” right? The teacher overhears this happening and calls someone to the front of the room; who do you think he’s calling to the front? The boys harassing her or the girl wearing the tank top? If you thought it was the boys, you are so wrong.

Welcome to middle school, where young girls start are taught that going through puberty, having curves, and wearing tight clothing is all something to be ashamed of. Girls are being taken out of class and forced to wear ‘shame shirts,’ big baggy t-shirts that say “Dress Code Violator.” Embarrassing girls for not wearing big baggy clothing that covers every inch of them is normal these days and has been so for many years.

Is it true that these young girls start wearing clothes to excite boys when they enter middle school sexually? No.

Why are girls publicly humiliated because the boys in their class are harassing them? Since when did developing breasts, growing wider hips, and having a larger butt become something that young girls got to decide to have? Isn’t that all a part of puberty and becoming a woman; last time I checked, these young girls weren’t developing these things to ‘distract’ or ‘impress’ boys. Why is wearing a bra something young girls should be embarrassed about and try to hide? Isn’t there a better way to handle this situation besides shaming these girls?

How about instead of teaching girls that they need to be ashamed and cover their bodies we teach young boys that it isn’t okay to catcall or sexually harass girls. Boys aren’t born into this world, thinking that it’s okay to objectify and harass women; they are taught that. They learn that they won’t get in trouble for catcalling and come to believe, “they simply can’t help it.”

This issue has been brought up again and again in the news, and more and more people realize this isn’t okay, but unfortunately, things aren’t changing as they should.

Just last week, I went to drop off a school book for my best friend’s little sister at her public school. As soon as I walked into the office and asked if it was okay for me to go give it to her since it was lunchtime, I was told I couldn’t because what I was wearing “wasn’t appropriate.” I was told that if I wanted to see her, I would need to put on a jacket. I was wearing jeans, rain-boots, and a cropped t-shirt that showed the skin right under my belly button.

I felt like I was in middle school again, having a room full of grown adults, both men and women, tell me that I should be ashamed of myself. Last time I checked, my stomach wasn’t there to sexually arouse anyone, especially not twelve to fourteen-year-old boys.

I find it sad that while we are protesting and trying to make this world a place for all women to feel equal and protected, we are still teaching the next generation that a women’s body is still being sexualized and something to be ashamed of.

If I ever have a daughter, I will make sure that she knows the natural process of being a woman is nothing she should ever be embarrassed about, and if I have a son, he will learn to respect women and not harass them. After all, isn’t that just basic knowledge?

Feminism In An All-Girls Catholic School

Sex And The Brown Woman