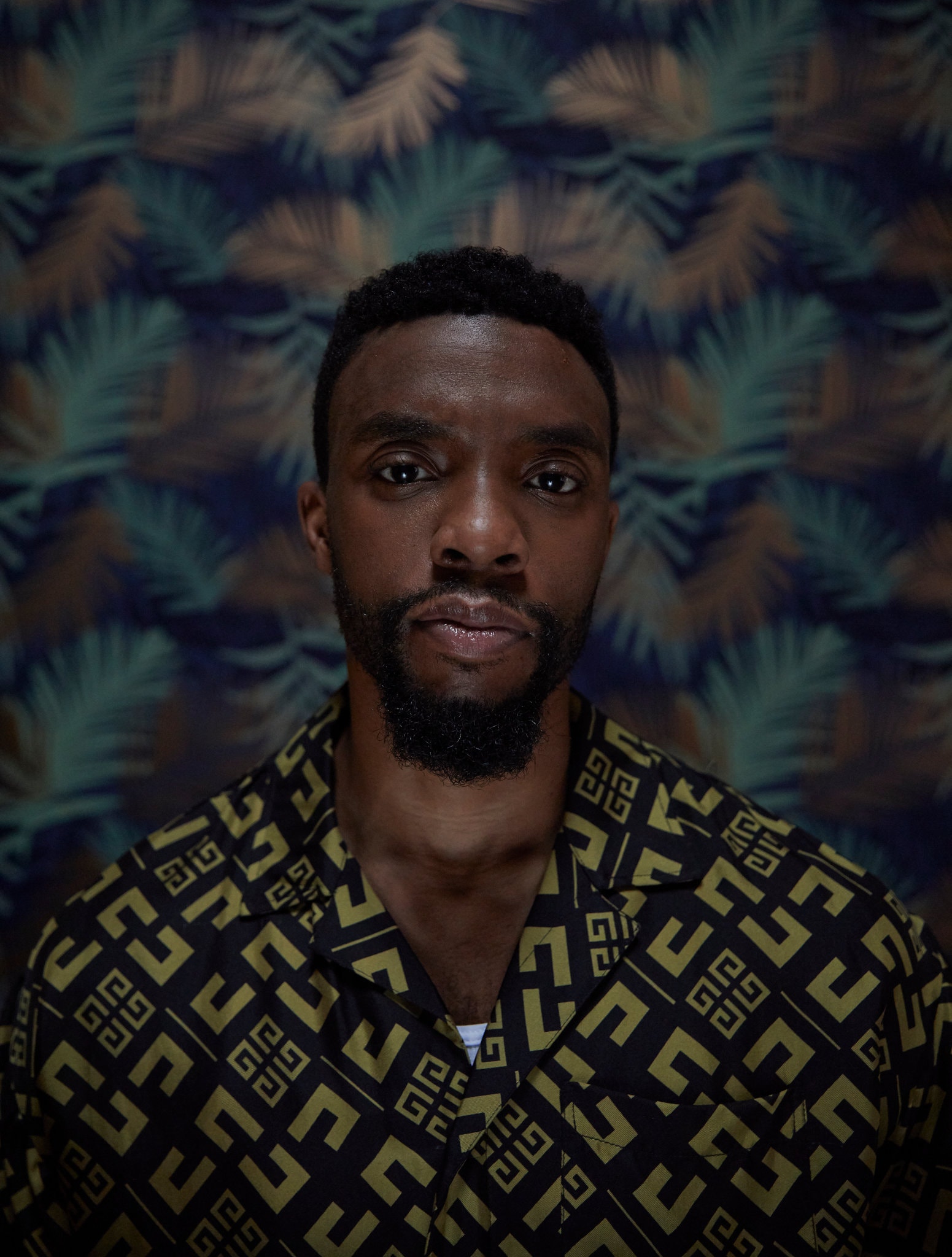 Chadwick Boseman reimagined the Black man on screen. Reshaped masculinity. Rewrote the unspoken rules entrenched within Hollywood. And finally, he breached the invisible white barrier barring representation for centuries. At 43, a bodacious, verging on baffling career beginning, was brought to a bottomless end thanks to cancer.

On the evening of the 28th of August, I had just watched an Actresses Roundtable interview on the Hollywood Reporter. Janelle Monáe and Zendaya were the only POC, surrounded by well-established white actresses like Reese Witherspoon and Jennifer Anniston. I had an epiphany when I heard Janelle Monáe speak.

Many black actors have a distinctively calm, soothing presence. This is especially so when they are not in any role, but purely being themselves. I messaged my friend about it. He remarked that they reach a zen-like, nirvana state of calm, that only actors of color really reach.

I was struck by this comment, and it was no longer such a mystery to me. Through their endurance, we do not see resignation but wisdom and kindness, in the face of apathy and hatred. I could name so many actors I got this vibe from, like Mahershala Ali, Viola Davis, and Daniel Kaluuya.

Who is Chadwick Boseman?

My list did not include Chadwick Boseman. He passed away on the same day, the 28th. To be fair, he was on the periphery of my list. The only film I had watched of his was Da 5 Bloods. On an iPad, and on a long flight home. He did not have an overwhelming amount of screen time, and yet he stood out to me. I yearned to see more of him in the film. He seemed much younger than he was. And at the same time, a lot wiser than you would expect a 43-year-old actor to be.

I remembered his bold, tragic presence in the film, how he acted with seemingly every cell in his body. I was attracted to his seamless chameleon-like skill, something every actor aspires to. His face struck me. Hauntingly beautiful. Hauntingly humble. Perhaps it is haunting because (spoiler alert) it is established his character died quite young, in the Vietnam war.

That was enough for me to know that if he hasn’t already made it big, he would. I googled him later and realized he was in Black Panther, and The Avengers. I have always been behind when it comes to the Marvel universe. But I instantly knew he already had made it big. And that he probably hadn’t even reached his peak yet.

Little did I know that it would be his peak. Also, his end. Despite having barely watched enough of his films, I was, like countless others, profoundly affected by his death. It led me to watch his interviews, read up on his filmography, watch Black Panther, and his other films. He did an Actor’s Roundtable interview, surrounded by established white actors like Hugh Jackman and Richard E. Grant. I stumbled upon it a year ago but hadn’t paid much attention to him. This is because I was more interested in what Timothée Chalamet had to say.

I re-watched it a couple of days back, just for him, and every single bit he spoke, though not much, was enough to ensure that he very easily topped that list of black actors who possessed that innate sense of calm and humility.

“As a person of African descent, this searching for what my real culture is and showing that on-screen and being able to give that to an audience…as an African-American, I’ve searched for that my whole life…Not only do I know, but I value it as a certain patriotism to something that has never been lost, it is ancient. Being able to hold on to that it was something throughout the movie- I was like wow, the weight of that is something I have to convey to the world. We wanted to make a superhero movie, but that’s not the most important thing here.”

Chadwick Boseman, on the Actors Roundtable by The Hollywood Reporter

He then spoke about the impact the monumental results of the film had:

“The way the studio responded, I never thought I would hear a studio say, yeah we’re going to put the money behind this movie with mostly a black cast. And so, it made me more idealistic about the world and how things could go.”

For an actor, or an aspiring actor, what he next said was extremely illuminating:

“I think you should only do it if you love it, because it’s not all the glitz and glamour people think it is. It’s really a blue-collar job. And you work overtime, you sweat, you get hurt, you’re an athlete, you’re everything that is necessary, and you’re pulling from things that most people don’t usually deal with. You’re dealing with political parts of your reality, social parts of your reality, race in a way people don’t have to deal with, gender in a way people don’t have to deal with, on a day to day basis. And I think you have to want to go through that struggle. And I feel the same way about my work at that point in time, as I do when my movie makes a hundred million dollars. Or a billion.”

A film I would recommend people to watch if they have already watched Black Panther or simply want to learn more into the range of Chadwick Boseman’s filmography is Marshall, directed by Reginald Hudlin. The film is ever more relevant due to the present climate and movement of Black Lives Matter, chronicling the renowned American lawyer, civil rights activist, and first African-American Supreme Court Justice Thurgood Marshall. It is set prior to the history-making case Brown v. Board of Education, that ruled racial segregation in public schools as unconstitutional.

It revolves around a lesser-known but one of the first cases of his career, the State of Connecticut v. Joseph Spell. What makes his performance so admirable is the amount of restraint he put into the role. This was due to the Judge agreeing to admit Marshall, but forbidding him to speak during the trial, whilst forcing a white lawyer to be the lead counsel. In other words, he was being Marshall’s mouthpiece.

Thus, Boseman’s acting is truly in the subtlety of his expressions and physicality, as he guides the lawyer through notes, whispers, and facial signals. In a podcast interview ‘Off Camera with Sam Jones,’ Boseman recalls the challenge:

“How do I do this silently, and how do I have the right intentions, so you can see what I’m thinking when I’m not saying anything? To me that’s more difficult than actually having the words because now I have to convey things that I’m not saying very, very clearly. To me that is just as hard, you have to know where the camera is, you have to know what the cinematographer is doing, you have to fight for certain shots that maybe they’re not thinking about.”

Chadwick Boseman, on the podcast interview ‘Off Camera with Sam Jones’

What makes Chadwick Boseman’s death by colon cancer so pivotal to the testament of his character is he hid it for four years. Four years that played a crucial part in his career, since he took on roles in films such as Black Panther and Da 5 Bloods by Spike Lee, as well as the Avengers films. In such a short span, he changed what little black and brown boys and girls will grow up seeing as superheroes on screen. They will see a reflection of themselves, not for tokenism but as the fully sculpted humans that they are.

He hid his diagnosis even from the filmmakers, which is shocking as it means even during his bad days- days that he surely struggled in- he persevered for this greater cause. He humanized superheroes. One of the only times there was speculation about his health, was when he released an IGTV video celebrating Jackie Robinson, one of his breakthrough roles as the first black athlete to play in Major League Baseball.

He wears a ‘42’ cap and a necklace with the continent of Africa as the pendant. We can only see his face, although it is much altered, hollowed, and thin. There was a lot of press overage on his weight loss. And yet, he used that video to encourage people to donate medical equipment to communities hit hardest by the coronavirus.

The human experience on screen

The director of Marshall, Reginald Hudlin, recalled persuading Boseman to take on this role, as he was reluctant to play another historical figure. Hudlin posed the question- ‘Do you think a Thurgood Marshall movie should be made?’ When Boseman replied with ‘yes, of course,’ Hudlin said there will be a film.

Chadwick Boseman realized the monumental historical implications of Marshall’s career, and the importance of reaffirming a great man and his example. But most importantly, he realized the urgency of the greater priority of transforming how black lives were portrayed and received on the screen. Boseman spearheaded a wave of cinema that went against the worrying norm of black lives being marginalized through systemic racism even in the 21st century.

Boseman agreed to essay the role. There is no doubt that Thurgood Marshall, and other heroic humans of the civil rights movement like Boseman’s own role model Malcolm X, would be incredibly proud. They will welcome him, for continuing their momentum from the 60s, and realizing it in this current wave of Black Lives Matter.

Chadwick Boseman did not let the disease define him. He is a trailblazer for a new era of black cinema. He reflected a world in which black lives mattered. A beacon in a colorless world.

I am a twenty-year-old undergraduate at the Guildford School of Acting/University of Surrey. I am an Indian currently living in the UK. I’m an intersectional feminist & activist. I write about all things from consent, to sexual assault, trauma, body dysmorphia, also in connection to South Asia. I study theatre and performance at uni, and I’m learning more about decolonising theatre & film. I started an interview series on my Instagram (@hotshlocolate) called Musing on The Middle East. My best friend is Syrian and having lived briefly in the Middle East, I realised how little the western world knows of the Middle East, and how alarmingly normalized unrest in the Middle East has become. Through these interviews, I also especially want to shed light on the experiences of middle eastern women.