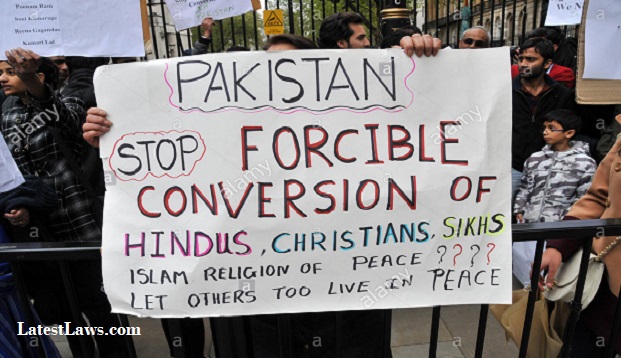 Religious minorities in Pakistan have been targeted in various ways through social, economic, and legal means. Often the laws designed to protect them have ranged from dismissive to oppressive. As intolerance and religious extremism rises, forced conversions in Pakistan, the act of using violence or coercion (physical, social or psychological), to attain a religious conversion, have been rising at an unprecedented level. However, forced conversions in Pakistan are uniquely and largely targeted at young girls from the Hindu and the Christian communities. Religious intolerance from a majority Muslim country overrun by uneducated and extremist mullahs contributes largely to this epidemic. However, systemic failures, political agendas, and the overall societal, political, and judicial systems operating under the umbrella of patriarchy are also complicit. This ensures that young girls from minority communities are forever trapped in this endless cycle of oppression.

The Human Rights Commission of Pakistan and MSP estimates that approximately 1000 girls are forcefully converted every year. However, the figure could be much higher. There are major discrepancies in data as a large number of them do not make it to the reports. Hindu communities in the province Sindh face the worst of these atrocities. In November 2016, the Sindh assembly unanimously passed the “The Criminal Law (Protection of Minorities) Act.” The bill, if ratified, would have been a huge milestone for minority rights in Pakistan. It dealt in detail with the issue of forced conversions. And also, integrated into the law victims of extremism and child marriage as well. However, before it could be signed into law, it was returned by then Sindh governor as right-wing Islamic organizations threatened usual tactics of violence and disruption.

Earlier this year, two Hindu sisters, Reena and Raveena (aged 18 and 19), were abducted and forcibly converted. However, the court ruled that they had voluntarily converted to Islam. That same year, another girl, Arok Kumari, was also allegedly kidnapped in Jacobabad, Sindh. In a video that surfaced, she is seen with her Muslim husband. There she claims she was 18 years old. However, the Hindu community confirmed she was actually 15. In April 2020, another 14-year old Christian girl, Myra Shehbaz, was kidnapped by some Muslim men. Her mother feared she was raped and forcibly converted. The cases go on.

What Is REALLY Happening?

Pakistan is faced with an epidemic of forced conversions. To understand the situation on the ground better, I spoke to Vernon Anthony Manuel. He has worked extensively with the Minority Rights Commission in Pakistan, providing advocacy and financial support to bereaved Hindu and Christian families. Also, adding that there’s hardly a single example of a case where a Hindu girl that was taken and converted was able to rejoin her family.

He went on to explain that none of these are isolated incidents. They are supported by a web of religious exploitation that thrives on the patriarchal, feudalistic nature of extremism in the country. In several cases, young girls from Hindu and Christian communities are either raped or kidnapped by the landlords or men close to them. In cases like those, it’s the feudal lords that make the decision for the girls’ lives. Working closely with bereaved families, he told me how minority communities are trapped in the cycle of economic and social subjugation—often being unable to send their young daughters to schools for fear of their abduction, rape, or forced conversion. Even if the families make efforts to retrieve the girls, they are often shunned by the rest of their own community members.

“People who are supposed to uphold the law are the perpetrators themselves.”

In a revelation surprising to me, Vernon went on to explain that most families preferred not to have the media or higher powers involved in the case. The more attention a case of forced conversion gets, the more involved right-wing Islamist lobbies get. “They make it about their egos to ensure that the girl is not returned.” Judges and other lawmakers are a product of the same system that is biased against minorities. When cases go to court, it is always worse for the victims.

Biased judges aside, powerful politicians have long been complicit in allowing these conversions to happen. They protect perpetrators and bypass the law. Mian Mithu is one such individual. He is an extremist cleric and a politician from Sindh. He has been accused of the kidnappings and forced conversions of multiple Hindu girls. His notorious rise as a minority-hating extremist began with Rinkle Kumari’s case in 2012. Rinkle, a teenager at the time of the kidnapping and conversion, was the daughter of a Hindu school teacher. She was married off to a Muslim man, Naveed Shah.

Mian Mithu’s parade of making Rinkle a trophy in front of clerics like him and the victim’s community, when she came forward in 2012 and said she had accepted Islam herself, lies at the root of this problem.

The Victims and a Failing System

Men’s religious insecurity and fears about their own identity have resulted in this epidemic of forced conversions in Pakistan, specifically of young girls. The state and the judicial system has failed to protect its own citizens. It is made worse by the patriarchal understanding of the subjugation of a community or group of peoples by ‘conquering’ its women.  There are several political, social, and economic elements to the terrifying phenomenon. All valid in their place, but patriarchy is strongly complicit in all of those. The forced conversions largely include young girls. Feeding on the age-old idea that the honor and means of survival (through reproduction) of a group lies in its women. Women, again, become objects that serve the interests of men. Instead of human beings with thoughts and minds, independent of the community, group, or religion.

It is a messy, entangled web of disinformation, heretics and fanatics, and an identity crisis fueled by ignorance.

People see this as their ticket to paradise. Some see this as an easy way to subjugate women sexually and otherwise that are completely unprotected by law and underrepresented by the authorities.

At the center of all of this are clerics and mullahs in mosques and madrassas, almost running a factory of forced conversions, untouchable by the law and revered and often feared by local communities. Their extremist ideas are rooted in patriarchy, and so is their interpretation of religion.

Who is complicit? I say the state. The clerics. The politicians. And every other citizen who supports this system. And is threatened by an underwhelming minority to the extent that they tolerate denying them basic rights, ignoring the horrifying reality that young Hindu and Christian girls in Pakistan have to live with every day.

Read also:
The Underrepresentation Of Women In Science
The Crisis In Yemen And What You Need To Know
Let’s Talk About Period Poverty