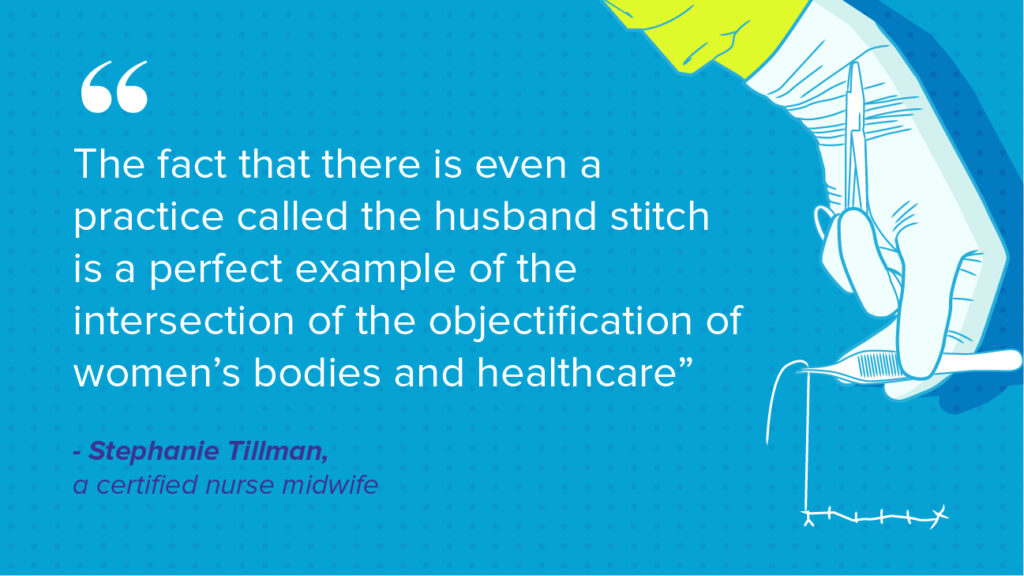 The “husband stitch” or “daddy stitch” is a medical procedure that most people are unfamiliar with. But it’s an urgent matter. Let me fill you in. After a woman gives birth (a natural birth, not a C section), the doctors have to sew her back up, right? Apparently, when the woman is barely conscious and cannot give her consent, many husbands have asked the doctors to “put in a few extra stitches.”

I’m swallowing down bile just writing this. Many men (incorrectly) think that after birth, the vagina will become very loose and stay like that. This just shows our lack of proper sex education. The vagina is a muscle. It loosens up when something is going in or coming out, and then it can go back to its normal size. Duh. Of course, after birth, it might become a little “looser” than normal, but…in the grand scheme of things, that’s not that important at all. But to men, of course, it’s extremely important. So important that they have to ask the doctors to put extra stitches in to make it tighter, thus being named the “husband stitch.”

When I learned about this, my immediate thought was, “AAAAHHHHHHHH” and then, “why don’t the doctors say no?” Again, due to lack of knowledge about women’s reproductive systems (and lack of care), even most doctors do not know that this is unhealthy and painful for women and have bought into the myth of the vagina becoming too loose.

This procedure happens to 60% of women who give birth, and it’s almost always unknowingly. It’s only been getting attention recently, because there has been an influx of women with medical problems that doctors do not know the cause of. Many women have been complaining about pain during sex and various pains in their reproductive system.

Doctors usually brush off these claims because there is little to no research on such topics. Most of these women who seek a diagnosis get a diagnosis of ovarian cysts, a bad UTI, or nothing at all. It continued like this till one woman doctor was treating a lady who complained of pain during sex. She examined her and found the extra stitches. When she asked the patient if she was aware of the stitches, the woman was alarmed. She had never known, for years, that she had undergone this surgery. So many of these medical problems are due to the “husband stitch.”

This problem really infuriates me. The stitches themselves are gross, unnecessary, and not done with consent. But this whole issue just shows a lack of understanding or care for women’s reproductive system. There needs to be much more research done so women don’t get wrong diagnoses (which could potentially be so dangerous), and get the treatment they need immediately. And so men can’t get away with doing such horrible things. This idea of “loose” vs. “tight” vaginas needs to be eradicated. It’s not true, and it’s definitely not important, especially after your wife has given birth to your child. I hope there is a lot more scientific focus on women’s health in the future.

5 Reasons Why You SHOULD Date Indian Girls 14665

Colorism And Anti-Blackness In The Asian Community 10910