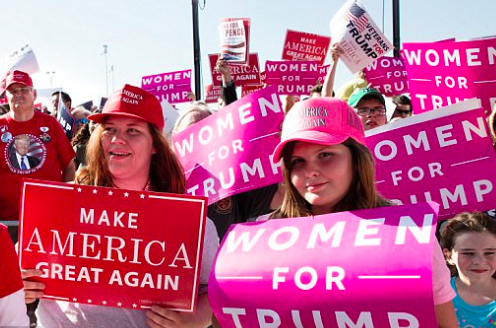 In 2015, Donald Trump told America how he felt about women in office: “Can you imagine that, the face of our next president? I mean, she’s a woman, and I’m not supposed to say bad things, but really, folks, come on. Are we serious?”

Apparently, misogyny is not confined as a male-only attribute.  In 2016, Trump only won a quarter of the vote among Hispanic women and 4% from black women.  However, he outperformed expectations among one group: white women. Long criticized, 52% of white women cast a ballot for Trump in the presidential election.

Despite openly calling women pigs and facing sexual assault allegations from 22 women, white women in America still show higher approval ratings for Trump.  A recent study from Vox quantified that white women expressed a 45% approval rating for Trump, 3% above the national average of 42%.  In the heat of the feminist movement and a record-breaking number of women elected into Congress, citizens are asking white women: why?

The phenomenon starts with perception.  Too often, people believe that because white women are suppressed by the patriarchy, they will support progressive social movements.  Our expectation that white women understand the history and oppression of colored communities is far from reality.

When looking back to the mid-20th century, white women increasingly lobbied against school integration of Brown v. Board of Education and leading the charge against black-and-white public facilities.  Similarly, today many white women advocate for issues completely opposite of the leftist agenda, such as limiting reproductive rights.

Jackie Payne, the founder of GALvanize USA, an organization that is focusing specifically on engaging white women voters, explained that “White women in rural, small-town, and suburban America are connected to and surrounded by more conservative white men” than any other group.  Increasingly, these women are isolated by politics while holding certain conservative values close to heart.

Perhaps most impactful, is the lack of connection with white women.  Mass media has quickly jumped on the bandwagon for bashing white women for supporting “White Feminism” and voting for Trump.  By doing this, we further their negative sentiment towards the progressive movements. When other women value attacking over negotiating, this decreases the likelihood of finding a middle ground.

Payne, having actively reached out to white women in the past year, believes these voting tendencies are a systemic problem resulting from a lack of information and influence from the environment.  As for the colored community, there needs to be a mutual understanding that a woman’s environment largely shapes their political views. Although a majority of white women voted for Trump, it’s not because they’re inherently bad people, it’s because of history and the way the left has responded to Republican women.

When moving forward, it’s especially important to hold conversations.  When people are limited to echo chambers and live in confirmation bias, the status quo is reinforced.  Currently, the patriarchy affects all women, regardless of race or background. In order to create change, there needs to be uniformity and respect towards all women.

After Trump assumed the presidency, news reporters question white women on why they voted for Trump.  Most responded with, “I don’t vote with my vagina.” Going forth in a heated political climate, we need to vote with our brains, and that’s a collective effort that requires all women for each other.