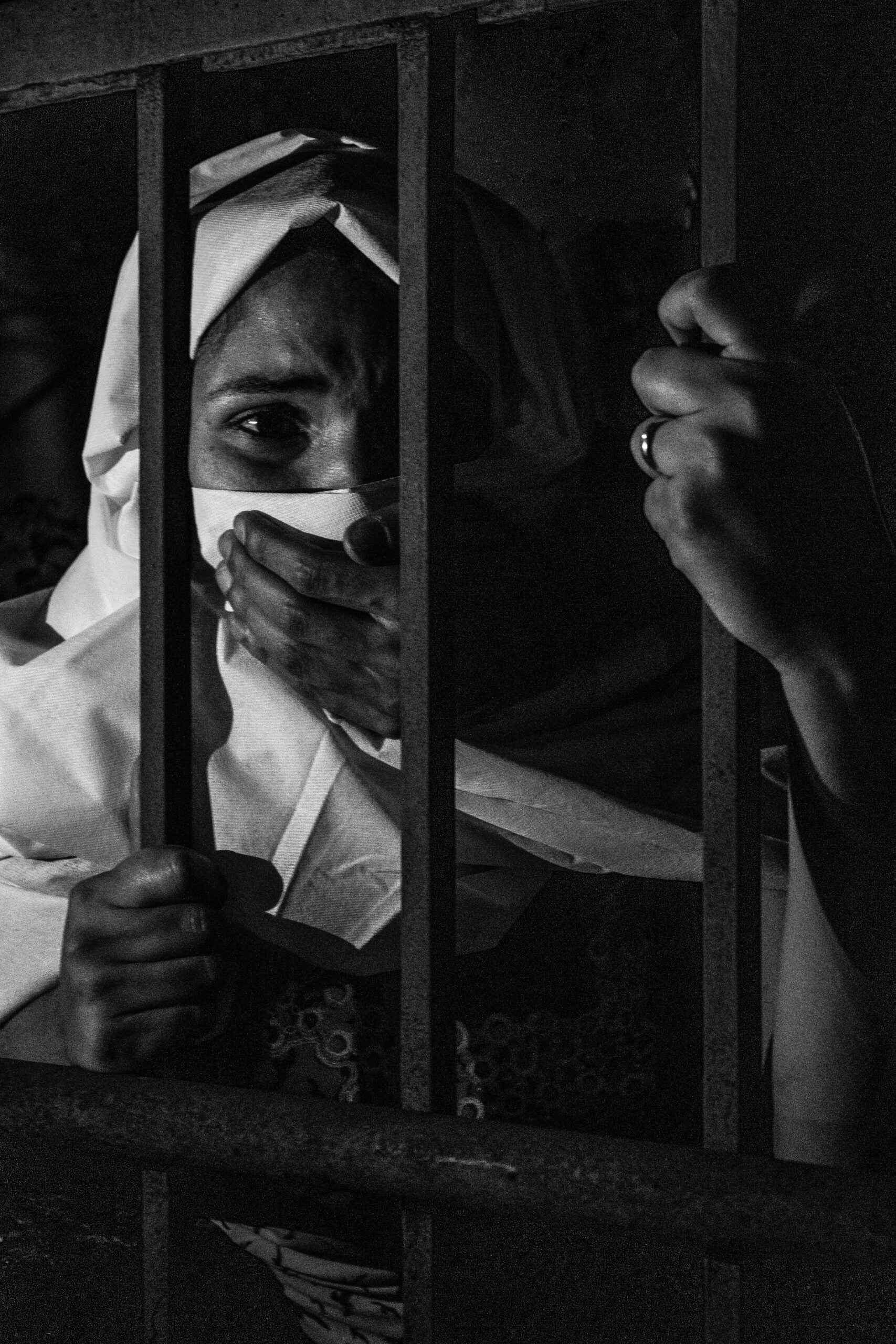 In the early month of September, a Pakistani woman with her three children traveled from Lahore to Gujranwala on a motorway. Along the way, she was raped by two men in front of her children. The Punjab Police of Pakistan arrested the first culprit Munib Ali. However, he was soon released because his DNA did not match the print on the victim’s car. The assaulter Abid Ali is still at large. CCPO Punjab Police made a statement on 9th September, “Why did she go out past midnight,” indicating that it was her fault for being raped.

This statement from the CCPO sparked outrage among women, men, and youngsters all over Pakistan.

Even after issuing a public apology, the CCPO of Punjab Police uttered these exact same words again a month later, “Rape victim traveled without husband’s permission.” It makes me wonder, would those men still assault her if she went out in broad daylight, with her husband’s permission? Would the goons have spared her then?

How can the police sleep well at night, despite knowing that the assaulters are still at large? Being out into this world, roaming freely, who would their next victim be?

One of the most shocking things is that few days after the motorway case, I saw another hashtag trending on Twitter. The trending hashtag was #JusticeforSaima. In Pakistan, a girl named Saima asked help from a girl named Hina in regards to finding a job. Hina told Saima to accompany her to another city, Islamabad, as she had a wonderful job opportunity for Saima. When Saima went into the room for an interview, two men started harassing her. Hina told Saima quietly, “Do what sir tells you to do.” The two men raped Saima Parveen at gunpoint, and she was locked in a room for two hours, tortured and in pain.

When they dropped her off at the bus station from where she came, she told her uncle about the incident. Despite filing an FIR (First Information Report), the police reportedly tried settling the entire case in exchange for money. Saima Parveen stepped into the outside world, searching for a job, in hopes of a better tomorrow. However, I think she forgot; she lived in a state where women are to be blamed for their assaults and rapes. A place where women are asked to cover up, and men are encouraged to search for their next prey.

On the same day, another young girl named Saima was brutally assaulted and killed by a family member. The pictures of her deceased body circulated twitter, with the same hashtag #JusticeForSaima. However, the only difference between the two Saima’s was their age. One was in her 20s. The other barely reached her teens.

A young girl was coming back from her job at a mall in the Clifton area Karachi when a gang of goons kidnapped her, and they threw her into a garden after they were done assaulting her.

A few days after the horrendous case of the motorway incident, a group of men assaulted a woman in front of her husband at gunpoint in Ferozewala, Sheikhupura district, Pakistan. A medical report of the victim proved that she was gang-raped. The Ferozewala police filed a report. However, no one had taken any action against it yet. The woman who was assaulted on the motorway was traveling without a male guardian. That is why most of the misogynistic and egoistic people blamed her for being treated so wrongly. However, what was the fault of that woman who was traveling with her husband? She wasn’t alone. Then why was she raped? What excuse do they have now for victim-blaming? Her only drawback was that she was a woman.

Why are women to be blamed when boys are equally unsafe? Three men allegedly raped a 12-year old boy named Zain Qureshi, days after the motorway incident. When he resisted, they shot him in the back. What was the fault of the boy? What was he wearing? What did he do to provoke those men? I know, not all people are bad, but they aren’t good either. Being a Pakistani, it breaks my heart, seeing my country fall in such a dirty turmoil. I wish our streets were safe for women to walk freely, without worrying about being groped or honked.

The motorway incident wasn’t the first case. Few days before that incident, a 5-year old girl named Marwah was kidnapped, raped, and killed by multiple men when she was on her way to the shop to buy cookies for herself. The assault and killing of children is not something that is not known in Pakistan. In the year 2018, when a minor named Zainab Ansari was tortured and killed, it sparked outrage globally, and the rapist was hanged.

According to Sahil, an organization that works on the protection of children, in the first six months of 2017, the number of child abuse cases reported in Pakistan was 1,764 in total. It makes me wonder how many cases go unreported, and how many daughters chose silence over the fight for their rights.

What about those rapists who roam freely? What about the harassers who live in our homes? Why don’t you listen to your child when he/she says they don’t like a specific relative?

Whenever I log into Twitter, I take in a deep breath. If a hashtag is trending with a woman’s name, it is another story of an innocent person robbed of her dignity and integrity. I live in a country where the police officer rapes a girl if she goes into the police station to file a complaint.

I live in a country where women are called “sluts” and “whores” if they dare to march and protest for the rights they possess as human beings. In 2019, when a young girl named Dua Mangi was kidnapped in broad daylight as she walked on the streets of DHA Karachi with a friend. People blamed her for being kidnapped because she dressed in a particular way.

My heart cries tears of blood, and my fingers quiver as I write about something as fragile as the topic of ‘rape.’ However, there are still a dozen cases I haven’t mentioned. A dozen women who were kidnapped and killed, a dozen babies mistreated, a dozen teenage girls wrongly touched, and a dozen mothers raped. And a dozen rapists still not found. A dozen FIR reports in Pakistan have been mixed up amidst the other FIR reports. Every day, the police have a new case. They rub their head in frustration and throw their files away, blaming the woman for being treated miserably in every way, asking about the size of her skirt and the tightness of her blouse, they blame an eight-year-old girl for being raped.

“No” means “no.” It does not mean she is begging for you to try harder. It simply means she does not want you to be around her anymore. Change starts at one’s own home. Let’s start with our brothers, our sons, and our fathers. A woman should not be touched or treated a certain way without her consent.

Don’t force her to date you, even when she has said no. She is not “trying hard to get.” She just isn’t interested. She isn’t a bad woman for not accepting your proposal, nor does she wants you to follow her out of the restaurant; even when to your car ride, she refused. It all starts with the small things.

We must teach young boys not to touch girls without their consent. If we work harder to raise responsible sons, instead of caging our daughters behind the walls of their rooms, perhaps then, mothers would not have to bury their dead daughters anymore.  Perhaps then, we’d give equal punishments to the culprits, instead of blaming the victim for going through the agony of torture and force. Perhaps, then, instead of asking our girls, “why were you raped?” we’d ask our sons, “why did you rape?” and punish them accordingly for their actions.

Now I ask this question to Pakistan: why was she raped? Why don’t you treat your women well? Why don’t you give severe punishments to the culprits? Why don’t you give justice to the innocent women and men who are killed, assaulted, and raped? Why do such cases keep arising, and all our efforts for female equality go in vain? Why do you shame your women for marching on a parade, asking for their rights? Because we wish to live our lives without fear consuming our hearts, that we won’t be able to come back home one day.

Read also:
Decriminalization: An Argument For Liberation
Breast Ironing: The Sad Story Behind It
A Rapist’s World

I am a twenty year-old English Language and Literature major living in Kuwait. My writings mostly focus on female rights, poverty issues, transgender rights, mental health issues, violence, drug abuse and also spirituality. I aspire to make a difference through my love for weaving words. My writings have been published in various educational, literary and informational platforms. Other than that, I have been a co-author of various international literary anthologies.