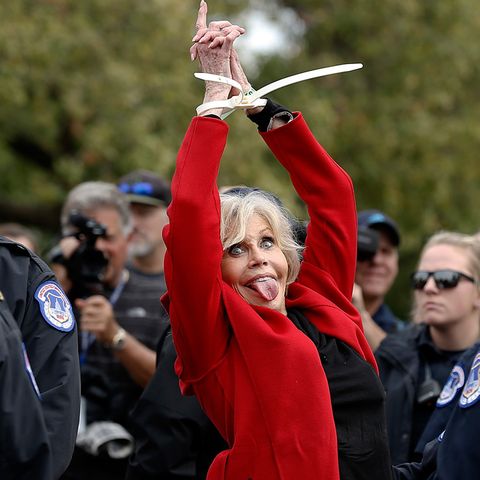 The past month has felt as if the United States has been transported back to 1968. The senseless murders of George Floyd, Ahmaud Arubery, Breona Taylor, and countless others have led to the well-overdue uprising, about the racial injustices that have plagued this nation for centuries. But the Black Lives Matter movement wouldn’t be where it is today without the Black Liberation and Black Power movements of the 1960s and 1970s.

Black individuals have been fighting for justice for decades. It was not until recently that a more significant number of their white counterparts decided to speak out about these injustices. Better late than never, right?

The massive influx of white individuals taking a stance against racism in the United States has led some to question its sincerity. Where does the line get drawn from being a performative act, such as posting a black square on social media to actually being an ally to the black community?

Learning from Actress Jane Fonda would be a great start. Jane Fonda has been on the frontlines advocating for change since the 1960s, in response to the United States involvement in the Vietnam War. After watching her documentary, “Jane Fonda in Five Acts,” seeing her road to unapologetic activism was refreshing and incredibly intimate. She fully acknowledged her previous ignorance and privilege about social issues and decided to take a stance against it.

To the outside world, Jane Fonda was seen as the “girl next door” many of her early roles were centered around that stereotypical blonde girl trope. She was even “Miss Army Recruiting of 1962,” but her upbringing had a lot to do with her early choices. Her father, Henry Fonda, a famous actor in his own right, fought in the Second World War and took on roles about the “American underdog” or even influential American political figures such as Abrahan Lincoln.

It only seemed fitting that she would be deemed as the “All-American girl” that she was until she went to France. While living in France with her then-husband, Roger Vadim, her relationship with French political activist and actress Simone de Beauvoir grew stronger due to the rising conflict of the Vietnam War.

As she stated in her documentary, she always thought that she had to be on the Americans’ side, “the angels,” until she realized that America wasn’t as good as she deemed.

She was at the forefront of advocating for change and was even surveilled by FBI agents, but did let their fear tactics deter from doing something she knew was necessary. One of her most controversial moments, was when she went to Hanoi, Vietnam in 1972, and leading to the nickname of “Hanoi Jane.”

At the beginning of her documentary, there is a recording of Richard Nixon condemning her outspoken behavior of displeasure of the Vietnam War while praising her father. She was one of the first celebrities who have taken an explicit political stance, challenging the idea of celebrities not being politically engaged.

But Jane Fonda’s activism has not stopped there. As she says, activism is the core of her being, has been vocal about her dislike of the Trump Administration, gun control, and climate change. She has pledged not to purchase any new clothing and was arrested a total of five times while protesting on Capitol Hill with other climate change activists.

On May 31st, Jane Fonda was interviewed by Don Lemon about white privilege in America, fittingly in the Black Panther Party like attire. “Because we’re white, we have had privilege. Even the poorest of us have had privilege. We need to recognize that, and we have to understand what keeps racism in place: the policies, redlining, banking policies, mortgage policies,” says Fonda.

Jane Fonda is an excellent example of what it means to be a white ally. Fully acknowledging her privilege and the racism that has plagued this country has never stopped fighting for change. As her quote says, To be a revolutionary, you have to be a human being. You have to care about people who have no power. A quote that will be the voice of social justice movements to come.

Read also:
Audre Lorde’s Resonances Then And Now
Three Black Ballerinas You Might Not Have Heard Of
Where Are The White Feminists During The Black Lives Matter Movement?

Internalized Sexism: Why Some Women Find Comfort In Tearing Other Women Down